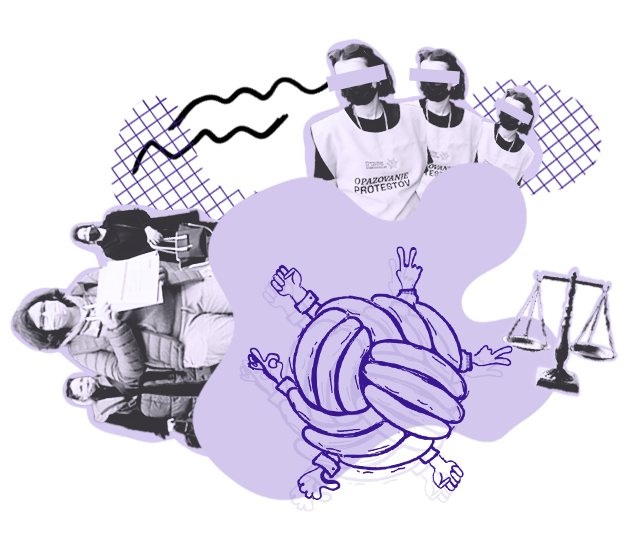 The Legal Network for the Protection of Democracy (LNPD) came about from the need in Slovenian society to monitor, offer tools for understanding and to protect the rule of law in times of global pandemic of corona-virus. Importantly, the pandemic in Slovenia coincided with formation, in March 2020, of a new coalition government led by Janez Jansa, the president of the biggest party in the governing coalition, SDS (Slovenian Democratic Party). Modus operandi of the new government soon raised concerns and four non-governmental organizations – Amnesty International Slovenia, IT-Institute for Other Studies – Today is a New Day, PIC – Legal-Informational Center for NGOs and Institute for Culture of Diversity Open – decided in the end of 2020 to join forces with the support and cooperation of various attorney offices, professors of law and volunteers. The main aim since has been to offer legal protection to individuals and organizations in their peaceful work for democratic principles and human rights that has been put under new strains due to Government’s measures.

In the first year LNPD responded to over 1150 inquiries and requests; filed in over 150 appeals to state offices, including to the state prosecutors office; it helped file over 50 lawsuits against government’s actions and measures; it organized 2 public expert discussions and filed 1 criminal charge against a governmental official. In 2021 LNPD also coordinated the preparation for a contribution to the procedure lead by the EU for its annual member states’ Rule of Law reports.

Through its research and analysis LNPD has throughout expressed warnings about the executive overreach. This amounted also to filed lawsuits and appeals, in which LNPD claimed that violations of the rule of law and disrespect of jurisdictions of legislature and courts had taken place.

Among the first and most worrisome Government’s measures have been restrictions of democratic participation and the right to appeal for NGOs in public interest in the field of environmental protection and nature conservation. These measures were first introduced as part of “corona legislation package” with little to no public consultation and were later also introduced in amendments to individual Acts, accompanied with the reorganization of the Ministry of the Environment and Spatial Planning and Environmental Agency so that offices issuing environmental permits are now under direct control of the Ministry. The government unilaterally pushed through the parliament amendments to the Water Act, which led to a referendum in July 2021 demanded by civil society and supported by political opposition. More than 86 percent of the cast votes were against the government’s amendments, previously rejected also by experts and environmentalists.

Throughout the pandemic the Government limited access to legal and oversight offices designating certain procedures as not urgent, which led to a limited oversight over its decisions and policies, especially in the field of data and privacy protection. The Government has also stopped systematically publishing draft legislation, and draft and final Government’s decisions leading to reduced public access to information and democratic participation. The state oversight offices, including Ombudsman and Court of Audit issued a statement in June 2021 drawing attention to repeated attacks on their work and political pressures exerted on the independent oversight bodies. Attacks, mostly through the internet platforms and media co-owned by SDS, have been directed also against the Constitutional Court and the court system in general, coinciding with judgments that were not to Government’s liking, and also against civil society organizations and peaceful protesters, labeling them “antifa” extremists, fascists etc.

LNPD helped with successful defense of a protester prosecuted for writing on the road in front of a minister’s house with chalk. Later on LNPD also helped to successfully challenge an attempted ban on protests at the Constitutional Court and helped to annul some of the fines police had handed out to peaceful protesters but was unsuccessful at arguing for a systemic remedy for numerous illegally handed out fines. Because of police violence and attempts by far-right, neo-Nazi groups to disrupt the peaceful anti-government protests, LNPD has also trained and organized observers of the protests for the first time in Slovenian history.

Almost all governmental regulations that have been challenged at the Constitutional Court have been annulled or the Court demanded that the Parliament and the Government correct the unconstitutionalities. Majority of the Court decisions establishes basic, procedural violations of the rule of law and the principle of legality. This was the case in the Court’s judgment about government’s regulations that limited the right to free movement (border closure, police hour). LNPD successfully helped with legal representation when a family wanted to leave the country but was banned to do so with government’s regulation. Previously a police instruction to “quarantine” had also been annulled due to inefficient argumentation thus infringing the right to a legal remedy.

LNPD helped in the cases of high-school students who organized a peaceful demonstration protesting the schools closures, which were in Slovenia among the longest lasting in Europe. Protesting students were fined and directed by police to judicial hearings because of the misdemeanors that police recognized in their actions. Judges dismissed all charges.

After unsuccessful drive to reach a high vaccination rate Slovenian Government decided in September 2021 to enact measures that have drastically limited access to services for people who have not been vaccinated, have not overcome Covid-19 or could not offer a negative test result (PCT). The Judicial Council issued a statement warning that a Government’s regulation cannot limit the access to courts, which is enshrined in constitution and laws. Similarly, the Constitutional Court agreed to hold the enforcement of the Government’s regulation that limited the workers’ rights of public employees if they do not fulfill the requirement of having overcome Covid-19 or being vaccinated – the motion about the constitutionality of the regulation has been filed by the Police Trade Union.

Slovenia has found itself, during its Presidency of the EU Council in the second half of 2021, under scrutiny of the European Parliament because of the deterioration of the rule of law and democratic debate in the country. Two key areas of concern for the EU are judiciary and media, with the most visible examples being Government’s intentional omission and refusal to name two nominated prosecutors to their posts at the European Public Prosecutor’s Office, and the decision of the Government to withhold monthly payments, prescribed by numerous Acts, to Slovenian Press Agency for its operations and fulfillment of its public service. LNPD has filed a criminal charge against the head of the Government Communication Office after the first criminal charge by Journalists Trade Union had been dismissed. In the Public Radio and Televison (RTV SLO) the Government has succeeded naming new oversight committee members, which has lead to new appointments at the editorial level of the main public media service.

The operating model of LNPD is new in Slovenian civil society but in the last year it has proven to be extremely valuable and effective. At LNPD, we believe we are building an example of good practice that can be useful also in other environments were undemocratic practices are on the rise. We have seen that through a solidarity-based network that joins forces of different actors we can importantly contribute to protecting and defending democratic principles, human rights and rule of law in Slovenia.